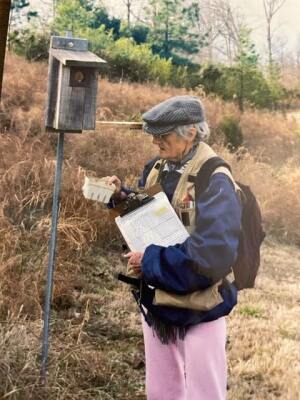 Frances Mary Outhwaite passed away peacefully at ARMC in Burlington, NC on Tuesday, September 20, 2022 after a brief illness. Fran was born in Mortlake, Surrey Co., London, England on October 7, 1923. Her parents were Herbert and Emily Jane Smith Outhwaite. Fran described herself as “sixth in a family of seven boisterous kids.” She was predeceased by her parents and siblings.

In November of 1939 she was sent to Long Island, NY to avoid the expected heavy bombing and gassing of London during WWII. She finished high school in NY and joined the Canadian Women’s Army Corps where she served in Canada and the UK until she was discharged as a Corporal on April 5, 1946. After working for Commercial Investment Trust Company. Fran soon began a long career with Burlington Industries in NY, but in 1986 she moved to Burlington, NC to escape the frigid winters.

Although Fran had participated in meaningful volunteer work throughout her life, it was in 1987 that she began making a bluebird trail at Cedar Rock Park and became active with the NC Bluebird Society and the Sierra Club. Throughout the area she was known as “The Bluebird Lady” as she gave educational talks and monitored nesting boxes. She volunteered with Meals on Wheels and The Burlington Woman’s Club Thrift Shop. She served on the board of The Friends of the Alamance Co. Public Libraries. In 2016, she received the most prestigious award presented by the governor, The Order of the Long Leaf Pine, for exemplary service to the state of NC and the community. As Fran liked to say, “You don’t get that for sitting around…” Fran was a huge proponent of walking which she did every day, often more than once, a habit she continued until her last days.

Fran will be remembered for her keen wit, medal winning participation in the Senior Games, love of travel, appreciation of nature and kindness to others. She touched many lives and will be missed by her friends and relatives, especially “TEAM FRAN”. She is survived by a number of nieces, nephews and cousins including Dorothy Sabatino (Jerry), Rodney Outhwaite (Gail), Terri Brentano (Max) and Paul Baribeau who all traveled great distances to visit her in recent months.

Gifts in memory of Fran may be made to the Burlington Bird Club, 3114 Brycewood Place, Burlington, NC 27215.

You can still show your support by planting a memorial tree in the memory of Frances Mary Outhwaite
© 2022 Piedmont Cremation & Funeral Service. All Rights Reserved. Funeral Home website by CFS & TA | Terms of Use | Privacy Policy | Accessibility